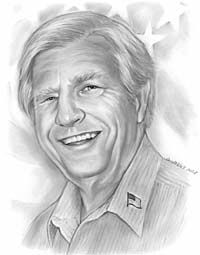 “I pledge allegiance to the flag of the United States of America and to the republic for which it stands, one nation under God, indivisible, with liberty and justice for all.”

It was with great sadnes we lost George Scofield, the House of Flags founder and museum curator, on November 25th 2008. His tireless passion for educating the younger generations about the history of our Nation’s flags, what real patriotism is all about, and the flag’s stories about our struggles for liberty and freedom never went unnoticed.

We are thankful to have known George and to have been influenced by his patriotism and his passion for the House of Flags. His portrait is prominently displayed in the Museum building, dedicated in memorial to George A. Scofield, founder and curator. And yes, we will all miss seeing his car driving through town with the American flag waving as he passes. “There goes George.”