“The first flag of North Carolina was white and bore a hornet’s nest and the date May 20, 1775”
(page 627: Preble, George Henry. Origin and History of the American Flag, Fourth Edition 1894, First Edition 1872 Boston. 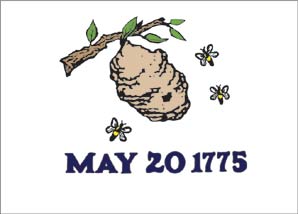 More than a Year before The Declaration of Independence

After being driven out by fierce opposition of Charlotte’s & Mecklenburg’s citizens to British occupation in 1780 during the American Revolutionary War British General Cornwallis wrote that “Charlotte Town was a hornet’s nest of rebellion.”

Note: A 3-foot by 5-foot reproduction of the Hornet’s Nest Flag is available from the House of Flags Museum, Inc. *** link to merchandise We had these high-quality flags produced by Annin & Company with our design on their dense 200 denier Nyl-Glo, DuPont Solar-Max nylon flag material, using the Anco Dye sublimation process.